us running out of grains

Wednesday, July 23, 2008
US Gov't out of wheat. Completely.
Government Holdings of Wheat are at Zero
By Benjamin Gisin

IDAHO FALLS, ID - Quietly, the last of the U.S. government's wheat reserves, held in the Bill Emerson Humanitarian Trust, were sold in late May onto the domestic market for cash. The cash was put in a trust for food aid. With no other government wheat holdings, U.S. government wheat stocks are now totally exhausted.

"While U.S. wheat industry strongly supports the administration's goal of maintaining current food aid programs to prevent rampant hunger worldwide, there is concern regarding the impact of selling reserve wheat o­n the domestic market and over the lack of commitment from the administration to replenish the Bill Emerson Humanitarian Trust. U.S. Wheat Associates has shared these concerns with high officials at USDA and o­n the President's staff and has asked about the Administration's intent regarding replenishment of the Bill Emerson Humanitarian Trust.

Staff from the office of the President's Special Agricultural Assistant noted that while there is no commitment at this time, the administration intends to replenish the Trust once the supply and price scenario stabilizes." (Note: U.S. Wheat Associates works in 90 countries promoting U.S. wheat exports.)

The Bill Emerson Humanitarian Trust was established in 1980 by an act of Congress and is authorized to hold up to 4 million metric tons of wheat, corn, sorghum and rice as a reserve for global food crises. The wheat is purchased and managed by the Commodity Credit Corporation and included in the total amount of wheat owned and held by the U.S. government. Holdings by the Bill Emerson Humanitarian Trust for corn, sorghum and rice are also zero.

With no formal plan for wheat stocks by the U.S. government, wheat stocks have defaulted to the arena of the private free-market sector. Unfortunately, the private sector has no plans for any kind of minimum wheat stocks that would protect from a price and/or availability standpoint the American public.

The recent wheat crises in America was sparked by the nation exporting more wheat than it produced. This means the true 2008 wheat margin for Americans is really the global margin of 2.6 percent. Any decline from global projections could precipitate greater wheat exports from America and further draw down already low domestic and global wheat stocks.

Food security is emerging as a global focal point. With the U.S. government and the private sector lacking visions for stocks, food security is poised to grow as a grass-roots issue around the nation.

The Infinite Unknown reports that the US has no remaining grain reserves.

WASHINGTON - Larry Matlack, President of the American Agriculture Movement (AAM), has raised concerns over the issue of U.S. grain reserves after it was announced that the sale of 18.37 million bushels of wheat from USDA's Commodity Credit Corporation (CCC) Bill Emerson Humanitarian Trust.

"According to the May 1, 2008 CCC inventory report there are only 24.1 million bushels of wheat in inventory, so after this sale there will be only 2.7 million bushels of wheat left the entire CCC inventory," [As stated in article above, the US has no grain inventory left] warned Matlack. "Our concern is not that we are using the remainder of our strategic grain reserves for humanitarian relief. AAM fully supports the action and all humanitarian food relief.

Our concern is that the U.S. has nothing else in our emergency food pantry. There is no cheese, no butter, no dry milk powder, no grains or anything else left in reserve.

The only thing left in the entire CCC inventory will be 2.7 million bushels of wheat which is about enough wheat to make 1/2 of a loaf of bread for each of the 300 million people in America." [Nothing left in CCC inventory]

The CCC is a federal government-owned and operated entity that was created to stabilize, support, and protect farm income and prices. CCC is also supposed to maintain balanced and adequate supplies of agricultural commodities and aids in their orderly distribution.

"This lack of emergency preparedness is the fault of the 1996 farm bill which eliminated the government's grain reserves as well as the Farmer Owned Reserve (FOR)," explained Matlack. "We had hoped to reinstate the FOR and a Strategic Energy Grain Reserve in the new farm bill, but the politics of food defeated our efforts. As farmers it is our calling and purpose in life to feed our families, our communities, our nation and a good part of the world, but we need better planning and coordination if we are to meet that purpose. AAM pledges to continue our work for better farm policy which includes an FOR and a Strategic Energy Grain Reserve."

AAM's support for the FOR program, which allows the grain to be stored on farms, is a key component to a safe grain reserve in that the supplies will be decentralized in the event of some unforeseen calamity which might befall the large grain storage terminals.

A Strategic Energy Grain Reserve is as crucial for the nation's domestic energy needs as the Strategic Petroleum Reserve. AAM also supports full funding for the replenishment and expansion of Bill Emerson Humanitarian Trust.

The Farm Service Agency gives us current and past CCC inventory numbers. 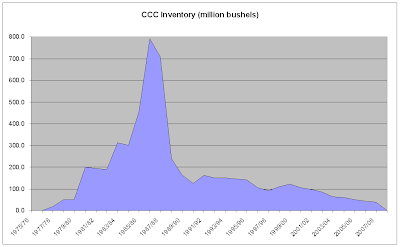 My reaction: The US government is completely out of wheat.

1) the last of the US government's wheat reserves, held in the Bill Emerson Humanitarian Trust, were quietly sold in May 2008 onto the domestic market for cash.

3) The US has nothing else in our emergency food pantry. There is no cheese, no butter, no dry milk powder, no grains or anything else left in reserve.

4) This lack of emergency preparedness is the fault of the 1996 farm bill which eliminated the government's grain reserves as well as the Farmer Owned Reserve (FOR).

6) With no formal plan for wheat stocks by the US government, wheat stocks have defaulted to the arena of the private free-market sector

7) The private sector has no plans for any kind of minimum wheat stocks that would protect from a price and/or availability standpoint the American public.

9) The recent wheat crisis in America was sparked by the nation exporting more wheat than it produced.


Conclusion: The US has done the same thing to wheat as it has to gold (though perhaps to a lesser degree). Since 1987, the US has sold nearly 800 million bushels of wheat, emptying its reserves. These sales, besides making the US vulnerable to a food crisis, have depressed wheat prices below what they would otherwise have been.

Posted by Eric deCarbonnel at 11:37 PM

at 15:20
Email ThisBlogThis!Share to TwitterShare to FacebookShare to Pinterest