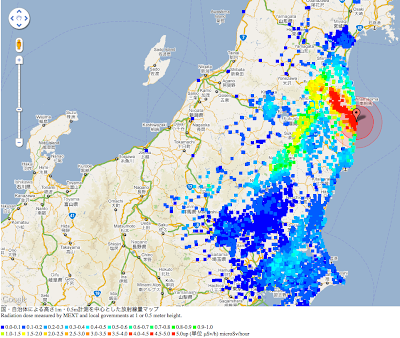 Japanese environmental activists and regular citizens have been measuring the radiation exposure of their locales and reporting them through social media to be published on the web. This citizen-science, which has been denounced as potentially inducing “fear-mongering,” has, in fact, been pretty rigorous. It is also providing us with a view of the accident’s effects not provided by those institutions that are alleged to be looking out for the public’s welfare (such as the government and TEPC0). The fretting of the nuclear engineers and scientists is a significant caution to the enterprise, but at least some of these scientists seem to be forgetting science’s own roots in such a milieu. Indeed, it was the democratic, amateur and publicist collection of “correspondents” to the enlightenment “Republic of Letters,” not the governmental academies of science or hierarchical universities that really cemented the intellectual hegemony of science in the West by providing it not only data, but also a discerning public.

What does this crowd-sourcing indicate? In the below map, put together by a independent scientists using citizen volunteers (h/t FishOutofWater at DailyKos), the color scheme essentially breaks down to blue being of concern (0.1 microsieverts per hour) with red being very, very dangerous (fifty times acceptable exposures at 5.0 microsieverts per hour). Essentially any color not dark blue is very concerning, especially for small children.

May April March
at 00:08 0 comments
Email ThisBlogThis!Share to TwitterShare to FacebookShare to Pinterest